This is a cultural advocacy website of KafyeBlaan Empowerment, Inc. specific for documentation of  artists from the Blaan indigenous peoples group in south central Mindanao with exemplary cultural skills with potentials to be nominated as Gawad sa Manlilikha ng Bayan (GAMABA) or the National Living Treasures Award of the Philippines. 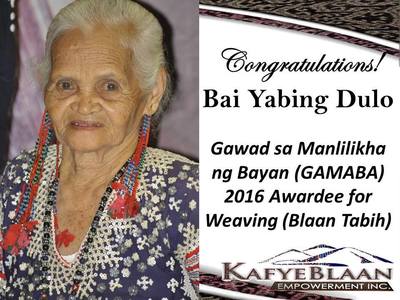 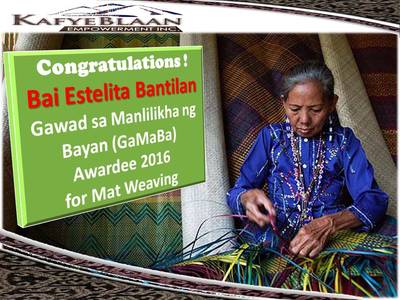 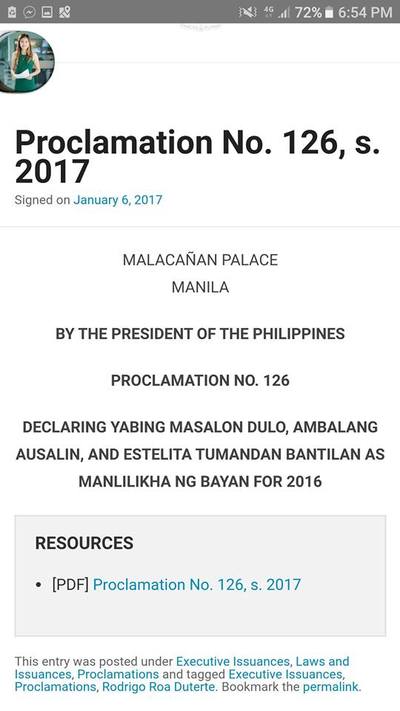 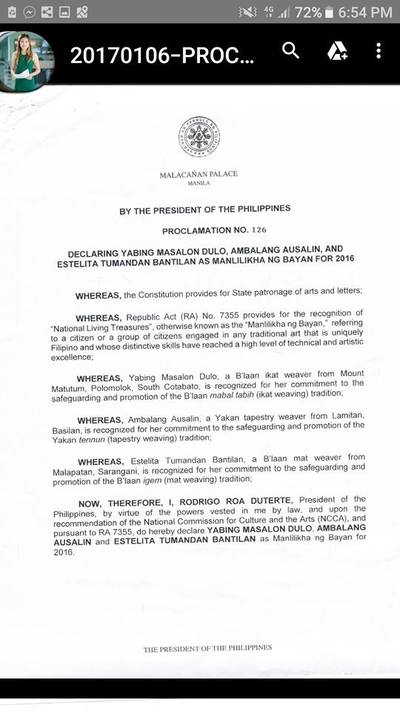 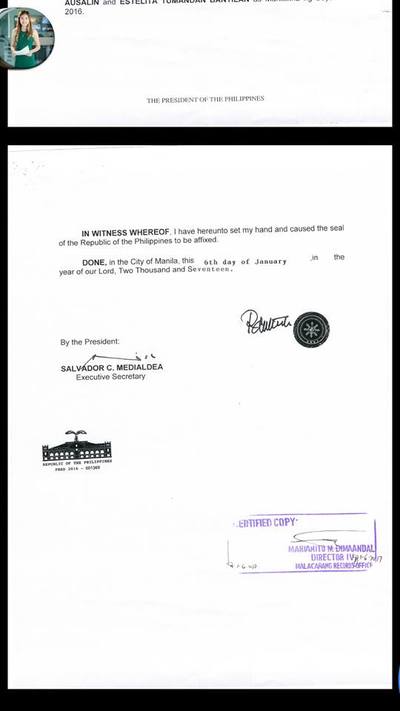 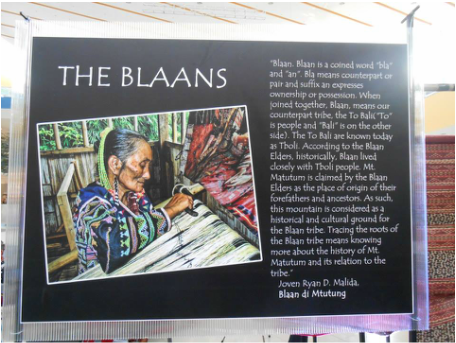 Photo taken by Yadu Karu during the "Mabal Blaan:Weaving the Threads of Heritage" Exhibition. Graphics photo of Gusiye Buan taken by Kim Tiblani at Lamlifew Village Museum.
The indigenous peoples (IPs) constitute a significant segment of the Philippine society. As defined by the Indigenous Peoples Rights Acts (IPRA), IPs are those groups of homogenous societies identified by self-ascription, who continually lived as organized communities on communally bounded and defined territories which they have occupied since time immemorial, sharing bonds of language, customs, traditions and who become historically differentiated from the majority of the Filipinos (Section 3, Article II, RA 8371).

The Spaniards who were the first outsiders to describe the Blaan thought that their name was derived from their supposed place of origin, the region around the Lake Buluan in Central Mindanao. The Spanish missionaries who were the first to observe the various non-Mulsim groups further noted that the Blaan settlements were widely dispersed throughout Mindanao. Then as now, the largest concentrations of Blaan are found in central and southern Mindanao. Most of the Blaan settlements are found in the Allah and Koronadal valleys but considerable numbers live in the mountains west of the Davao Gulf from Balutakay and all the way down to the bay of Sarangani including two islands of Balut and Tumanao at the entrance of this Bay. West of Malalag in the present Davao Del Sur Province, the Blaan inhabit the mountains and the grassy plains but are kept from occupying the coasts by a stretch of homesteads traditionally owned by the Tagakaolos who are mainly riverine dwellers as their name implies. Between the districts of Davao and the Cotabato, the Blaan predominate as far back as the American period in the 1900s (Fay Cooper-Cole, 1913).

West of Sarangani Bay, the Blaans live in close association with the Tboli with whom they intermarry. East of the Bay, intermarriages with Maguindanaos also go back to several centuries which is why influences from both groups are evident in the Blaan culture. The wonder is that the Blaan identity has remained distinct from both the Tbolis and the Maguindanaos and the today Blaan and the Blaan-speaking peoples are one of the most numerous indigenous groups of Mindanao (Gloria, H.K, Carino, J.L., et.al. 2006).

The National Commission for Culture and the Arts (NCCA) also noted that although many of the Blaan adopted the ways of modern Filipino and have been integrated into the main body politic, the Blaan still believe and practice indigenous rituals and customs. Blaan’s religious and traditional beliefs, practices and rituals have evolved out of our relationship with their land, forest and the diversity of resources therein. The interconnectivity of these factors plays important role not only in the economic aspect of their life, but also in the development of their culture and religion, our socio-political systems and our community in general. 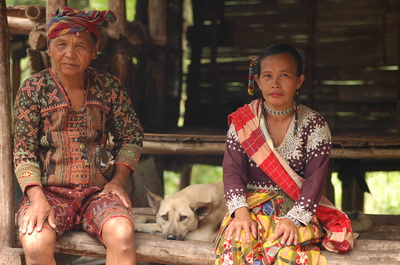 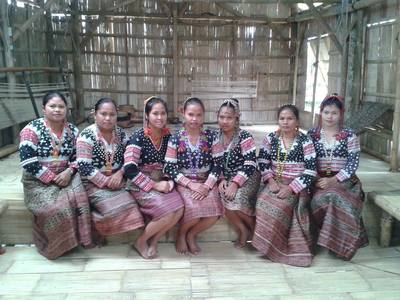 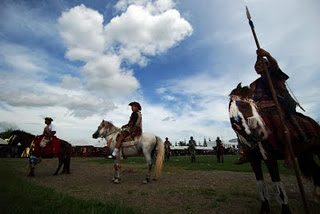 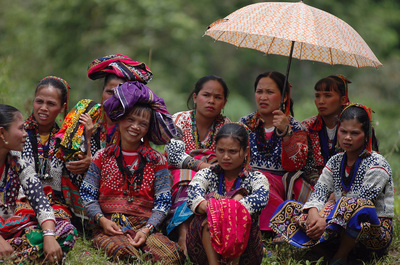 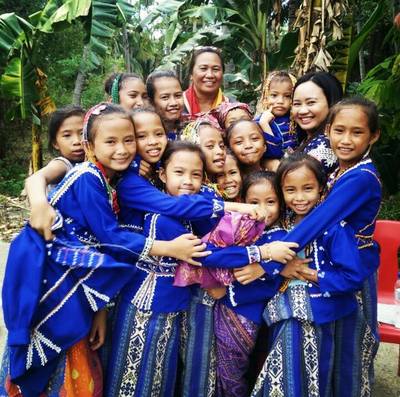 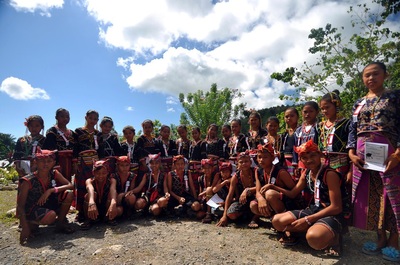 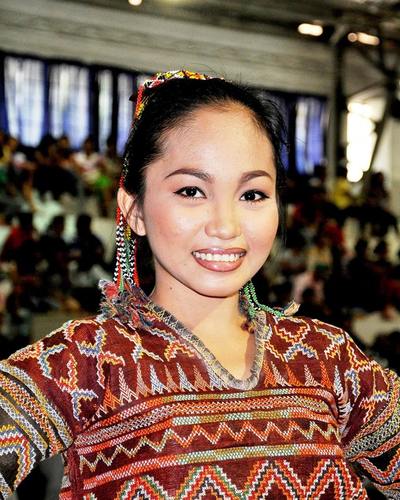 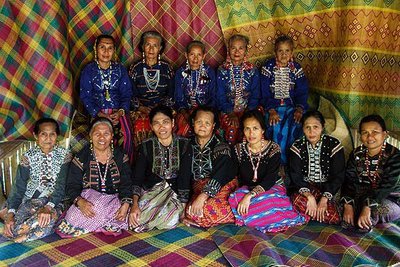 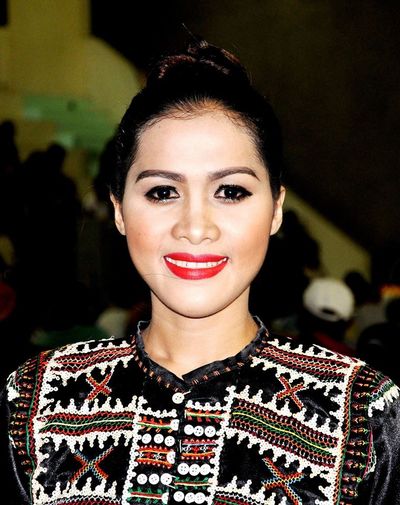